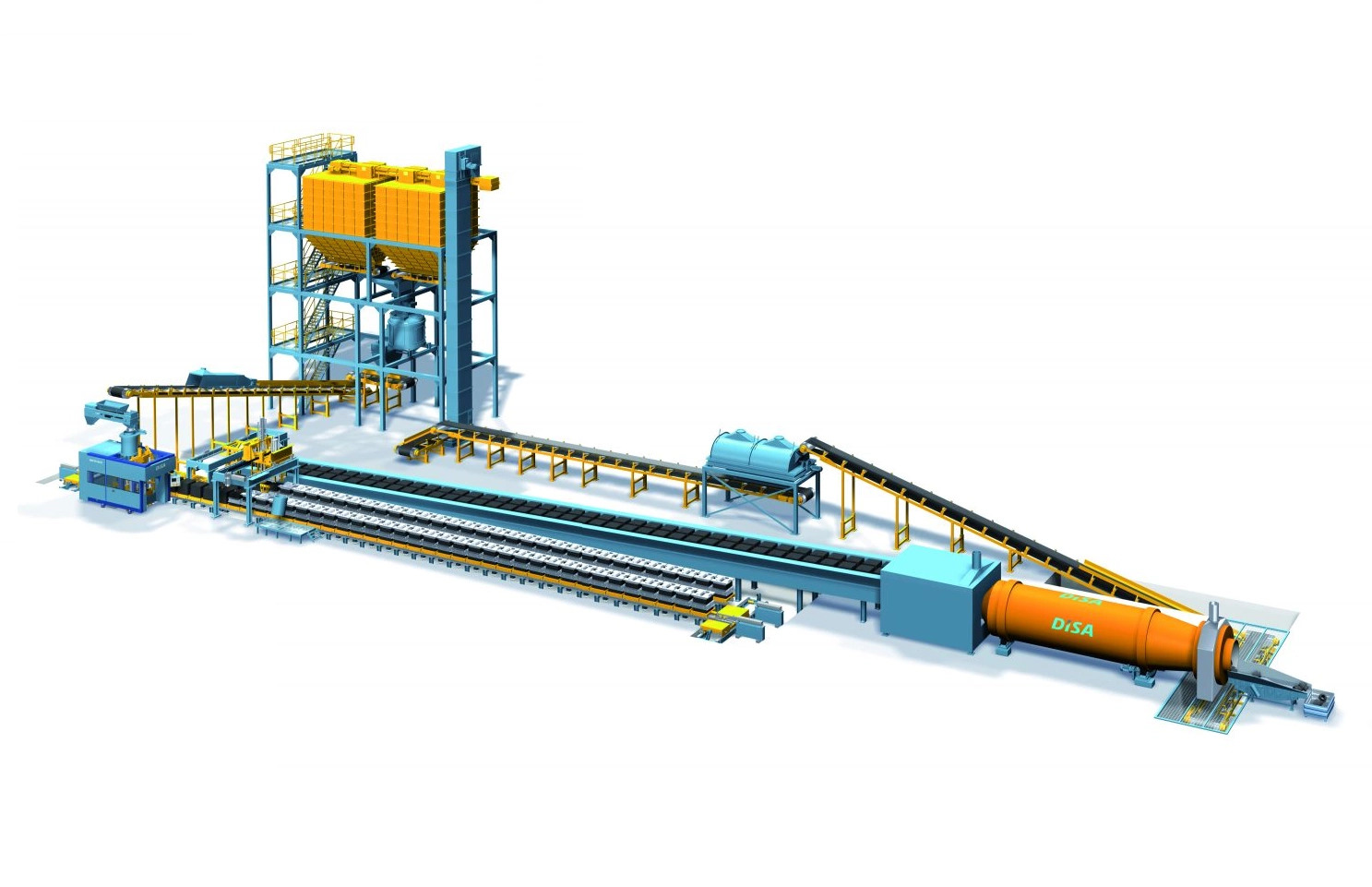 DISAMATIC is an automatic production line used for the rapid fabrication of sand molds for pouring molten metal, which solidifies, cools, and is removed from the mold to form a part known as casting.

The DISAMATIC system is made up of a molding machine and a mold transportation conveyor. Because of the moisture content, it uses clay bonded sand combinations, often known as green molding sands. These combinations are made up of silica sand, bentonite clay, and a few other ingredients. Their main component is inexpensive silica (SiO2) sand, one of the most ubiquitous substances on the planet. The molding sand mixture is forced into a rectangular steel chamber by compressed air and squeezed to a mold by two patterns fastened to the chamber's two opposed side plates. Squeezing one of the chamber plates causes it to retract and swing higher, while the opposite plates push the ready mold out of the chamber on a mold transportation conveyor. While the next mould is being constructed, cores can be automatically inserted into the mold cavity. The preceding cycle is repeated until a string of similar molds is established on the conveyor.

The molds can now be filled with molten metal, and the poured molds will be moved ahead on the cooling conveyor at the same rate as new molds. At the conveyor's end, the solidified castings are retrieved from the molds and processed further, while the sand is directed to the sand preparation factory for reconditioning and reuse in following cycles of the DISAMATIC molding process.

When compared to conventional molding methods, the DISAMATIC sand molding technique has significant advantages. It does not need flasks, which eliminates the necessity for transporting, storing, and maintaining them. DISAMATIC is a highly productive and totally automated system (only one monitoring machine operator is needed). This lowers labor consumption. Molding sand consumption can be reduced thanks to variable mold thicknesses that can be adjusted to a bare minimum. Because there are no perpendicular forces impacting the mould string once the molds have been cored and closed, the castings produced on the DISAMATIC lines are exceptionally accurate dimensionally. The molding machine has extremely few wear components and moveable parts. This reduces spare part consumption while increasing molding line efficiency. For the reasons stated above, the DISAMATIC method is particularly well suited for mass production of metal castings, which are critical components in the automobile and machine industries, civil engineering, and many other sectors.